We were again invited to the Madison Air Show.  We were asked to do the invocation, perform the National Anthem, honor Veterans present & perform our new routine with Cliff Robinson!

We were supposed to arrive early Friday afternoon for a practice... Well, that didn't work!  Long story shortened here, we got there at 5pm.  Didn't matter though, as it was waaay too windy to practice.  We all hoped the wind would be less difficult Saturday.  Cliff treated us to a wonderful Chinese Buffet!  I tried a frog leg...  Tastes like chicken!

Saturday morning started off very cool... down right cold even!  I took the '14 out for practice.  That cold dense air made it run like a monster!  It was a handful!  It was borderline violent!  I love it when it runs like that!!!  I was hitting 180mph in just over half of the 5000ft runway!  I would need this kind of performance as the wind would help push the Stearman.

At noon I gave the invocation, Mrs. Hollywood sang the National Anthem & we had several Veterans standing in line with the Color Guard.

Cliff then went up & did his solo routine.  This was followed by the other acts including "Pitts Bob" Richards & Emerson Stewart III.

Showtime!  I rolled the '14 out onto the runway right after Cliff took off.  I ran the 14' up & down the runway while Cliff flew around & got into position.  Cliff & I  raced the first pass & due to some "technical" difficulties, I easily beat Cliff.

The second pass was the "High Five."  It was a gusty day.  Cliff was bouncing around in the wind.  I really wasn't sure I'd be able to touch the wing.  Then suddenly, the plane settled  in.  I reached up & my hand slipped right into the grab handle!  We rode along for at least 100 feet with me holding the lower righthand wing!  It was the best "High Five" we've ever done!

Third & final pass; drag race number two.  I waited just a little on the starting line to make a better race.  I launched hard & the '14 stood up on it's back tire.  The cross wind pitched me into an angle which made me drift in behind Cliff.  Now I'm in the smoke!  I finally got the front wheel down & planted.  Now I've got to run as hard as the '14 will go to catch & pass Cliff before the finish line.  It was a photo finish!  I really wasn't sure who won.  I knew it was REAL close!  I downloaded the video that Mrs. Hollywood shot & looked at the finish frame by frame.  There it was!  A real photo finish!  I just nosed Cliff out at the Finish Line!!! 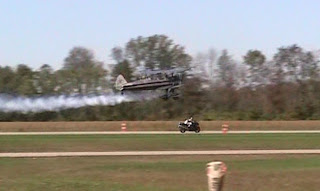 After the show, Cliff & I sat down & signed pictures for the audience & on each one I wrote, "Phil. 4:13."  This passage says, "I can do all things through Christ who strengthens me!"

And thus concludes the 2011 Air Show season for us.  We have a couple more Motorcycle events to attend & then we get the winter break.

I want to give a special shout out to Kyle Franklin.  We got the honor & priveledge to sit down & have breakfast with Kyle Sunday Oct. 16.  We thoroughly enjoyed our time with him.  For those who don't know, Kyle & his wife Amanda were involved in an Air Show accident in Brownsville, TX in March.  Both Kyle & Amanda survived the forced landing; however, Amanda was severely burned.  She lived 76 days & had 30 surgeries.  Ultimately, Amanda's severely compromised immune system could not fight off the infections & she passed away in May.  You will see a tribute picture in the right hand column of each page of this website.  As you see this, please remember to pray for Kyle & the family & loved ones who miss her so terribly.  We love you, Kyle!

Blessed Beyond All Reason,
Hollywood

This just in!  I just received some High Res Pics of the Finish Line at Madison...  The second race didn't turn out as I had thought!  Drat!!!  Congrats, Cliff!  I'll get you next time!!!