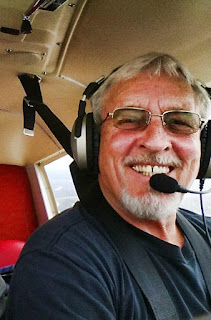 It is with a heavy heart that I must say farewell to a dear friend of the Open Throttle Ministries family.  "Snowman" went to his heavenly home March 10, 2016.  Snowman was such a joy to be around.  He always had a great smile, a hearty laugh, and an encouraging word.  Snowman and his loving wife Frosty have been big supporters of OTM.  I am so thankful to know that my farewell is only temporary as this world is temporal.  One day I'll be able to give him a bear hug, slap him on the back 3 times real hard and know that we never have to say farewell again.  You see, Snowman knew what it meant to be Born Again!  If you don't know what it means to be Born Again, contact us and we'll be happy to explain God's love for you and His plan for you to spend eternity with Him.

I think it only appropriate to share a portion of Snowman's obituary as it gives you a glimpse into this man we loved so much:

James Michael Snow, aka 'Snowman', 64, went to be with his Lord and Savior Jesus Christ on March 10, 2016. He died at home surrounded by his wife and family after a brief bout with cancer. He was born in Abilene, TX on April 5, 1951 to Tom and Geraldine Snow. He married the love of his life, Cheryl G. Snow on March 6, 1982.

He chose the glass and glazing profession as his career and worked for numerous glass companies throughout Texas. Along with his wife, Mike owned and operated Bethlehem Glass, Inc., until his death. He also owned American Glass and Mirror from 1982 through April 1999.
Mike loved anything with a motor and from a young age, progressed from a Cushman motor scooter to motorcycles and cars. At the age of 64, he achieved his lifelong dream of becoming a private airplane pilot.

On June 7, 1981, Mike met Jesus Christ and his life was changed forever. He joined the Christian Motorcyclists Association on December 15, 1997, and was also an ordained minister with H.E.L.P.S Ministry Fellowship International. Mike's passion was leading people to Jesus Christ and he loved dealing with men one on one in the trenches as he was called to in his evangelical ministry.

Farewell for now Snowman, we'll see you again on the other side!